Cheap and cheerful at just £6 retail, Age of Sigmar Skirmish offers a new way to play Age of Sigmar. It’s quick and very easy to learn whether you’ve played Age of Sigmar or not, and a small game can be wrapped up within half an hour.

As the name suggests, it’s a skirmish game, so you don’t need as many miniatures to play, nor do you need to worry about minimum unit sizes. Instead of working as units, each of your miniatures moves independently without needing to worry about coherency. For me, part of the attraction of Age of Sigmar was the ability to have a variety of small forces. This should resonate with most painters. Skirmish takes this to the next level in that you can just buy the few miniatures that you like the look of without committing to a whole army. Quickly and inexpensively, you can have a warband ready to go. To illustrate, the warbands we used were comprised of between 3 and 6 miniatures each.

You don’t get many Stormcast Eternals to start with: 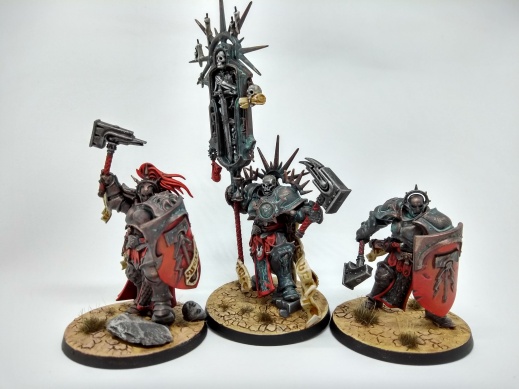 But you can get a few Sylvaneth in at 25 renown: 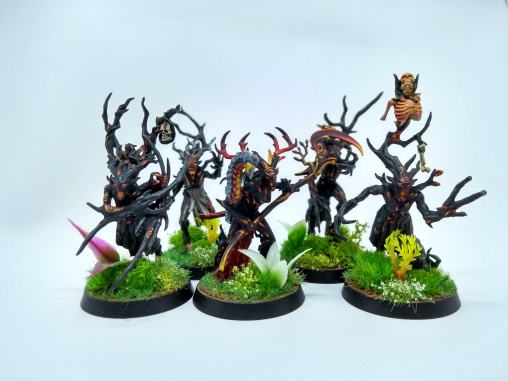 The book itself is just 40 pages but has its share of narrative and artwork along with all the rules you need and a renown system (points by any other name) for all the existing factions. Not all profiles exist in Skirmish but that’s down to the smaller scale. This is about the noble and his retinue, the treasure hunters and the adventurers. It’s not about the giant monsters or gods walking the realms.

It’s easy enough to tweak the rules to accommodate for multiplayer games. For our testers, we had 4 players, 2 of whom had never played Age of Sigmar before. In a 3 1/2-hour session, we easily finished 3 games and that included building warbands, explaining rules and a discussion after each game. To make multiplayer work, we made an initiative roll as normal and then the turn order went clockwise from the winner. In each combat phase, every combat played out regardless of whose turn it was, again following order clockwise from the active player. In terms of victory conditions, we followed the battle plans so in the Treasure Hunt battle, when one player was eliminated, the player(s) controlling the objectives gained a major victory.

The small scale of Skirmish allows you to zoom in on your characters and really open up the narrative options. The campaign in the book is a great place to start. Set in Shadespire, warbands start small (at 25 renown) and engage in their first altercation. As the campaign progresses, warbands grow, with victory giving that little extra renown to spend on reinforcements. Don’t worry about being left too far behind after a couple of losses because the players with lower renown gain a number of rerolls to use in the game based on the difference in renown levels.

A 4×4 gaming area worked for us, even with 4 players. The new Soulblight Necropolis mat from Games Workshop is ideal (it seems they’ve thought about this) and any other terrain you’re using for Age of Sigmar.

Our trial games were a blast, and at such a low buy-in price, Age of Sigmar Skirmish is a must-buy.