From isolation comes opportunity. With all this extra time in the house, there’s no better time to paint that backlog of random miniatures. After a rummage through various boxes I took an inventory of what needed painting and, with no upcoming games or deadlines, I could just start on whatever inspired.

First up was to finish the eldar wraith project. It consisted of the apocalypse vanguard detachment of 15 wraith guard/blades, 2 wraith lords, a spirit seer, plus a wraith knight which I had to get on account of it being such a great mini. With just a couple of wraith guard left to do, this was a quick win to gain momentum. A guide on painting the white for me Ulthwe scheme can be found here.

Frostgrave minis were a big winner in this as I had loads lying around from the Thaw of the Lich Lord expansion and some extras I picked up for D&D. The Cult of the Red Hand swelled its ranks with another 10 initiates, gnolls cackled their way into the fight, leaving just a few extra soldiers in grave danger. It’s mostly just a base, wash and drybrush job on these, with the soldiers benefiting from one of the GW contrast paints (militarum green) which meant it only took about an hour for 5 minis. 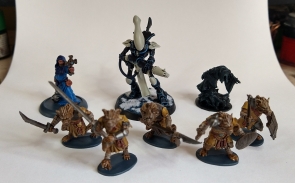 The dragonborn triumphant mini from Modiphius was something I’d been keen to paint for a while. Unfortunately the Elder Scrolls tabletop game has been delayed but this tided me over well enough for now.

Naturally, I’ve started growing the unpainted pile again by buying more eldar but the whole thing has started to look less intimidating. Next on the list is a squad of Deathwing terminators for an upcoming Space Hulk campaign, followed by a shiny Dark Angels leviathan dreadnought from Forge World.

Once all this is over, we’ll enter a golden age of fully painted armies. Feel free to share what you’ve been working on.