Far Over the Misty Mountains

It’s been a quiet period (in public, at least) at Storms Gate Creations, mainly because I’m on a geek’s pilgrimage to Middle Earth, also known as New Zealand. Naturally, filming locations for Lord of the Rings are top of my to do list here, perhaps a couple from The Hobbit too, and the downtime is also a good chance to work on my next novel.

It’s a fairly straightforward plan: do a circuit of South Island, followed by going right through the middle of North Island from Wellington to Auckland. Since Peter Jackson had to take all of the set down after filming, you need to use your imagination to fill in the gaps, especially where things were digitally altered or added. But a Tolkien fan is never short of some imagination. Hitting all the filming locations would be a lengthy and very expensive affair, particularly since helicopters are needed to see many places, so we’re focusing on some of the easier to get to places.

Out of Christchurch and heading inland towards Mount Cook gives us Lake Pukaki, the blue waters of Laketown. Roads run both sides of the lake so it’s easy to just drive along and look for a familiar view. Fortunately Bard sorted out the issue with the dragon so it’s a safer business. Sadly the light was terrible and cloud cover severe – there’s supposed to be a mountain in the background!

Another location easy enough to drive to is Fangorn Forest near Te Anau in the south. This is where the White Wizard returns freshly levelled up from smiting the Balrog and grabbing all the loot. It’s on private land now but you can get a peek from the road.

Rangers of Gondor, beware the oliphants! First stop on the Lord of the Rings tour from Queenstown was Ithilien where we learn how to cook a brace of coneys and watch Sauron gather all armies. Like I say, imagination required to fill in the gaps, but it’s easy to spot the ledge above where Frodo, Sam and Gollum spied on the army below. 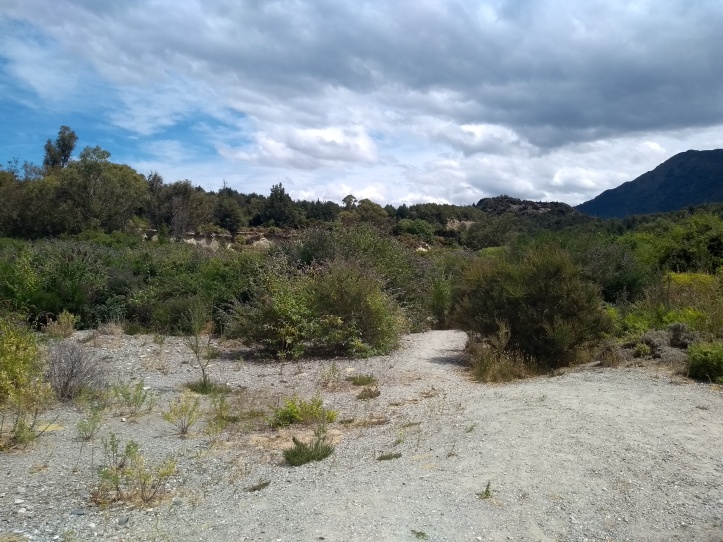 All the Backdrops, All the Time

These mountains are the Remarkables, or as Peter Jackson referred to them, the Expandables. They’re everywhere in the Lord of the Rings films. Here’s the view of them across Lake Wakatipu.

Foul deeds afoot in Glenorchy, the home of Saruman’s tower at Isengard. You can just about spot Caradhras and the Misty Mountains to the right of the bush.

Still at Glenorchy is Lothlorien Forest. Our guide had some props. I happily obliged though asked no questions why Gandalf would be wielding Anduril.

Gondor called for aid. Heading north to the Franz Josef Glacier, we have the mountains used for the lighting of the beacons.

The Road Goes Ever On and On

North Island beckons with Weta Workshop, simply walking into Mordor and, of course, Hobbiton, the only set rebuilt after filming.