The great and powerful Mycenaean empire has fallen. In the ruins of ancient Greece, chaos and darkness rule where once was learning and light. Unto this stage arrive Zeus, Athena and Hermes, the Lords of Hellas. They are technologically advanced beings who offer the gifts of the stars, and all they ask in return is unconditional worship as gods. With them come amalgamations of monster and machine who wreak havoc and destruction on the land. As in all such times, heroes rise, and armed with the weapons and armour of the gods, they command armies, lay low the monsters and raise great monuments to their new masters.

The latest Kickstarter from Awaken Realms, Lords of Hellas, has gone live today and already smashed through the funding target. Like their previous Kickstarter campaigns, the miniatures and artwork first grab the attention. Check out Leonidas, the day 1 exclusive miniature, to see why:

I’ve been lucky enough to work with Awaken Realms as copy editor on this project, along with some writing for the story trailer, so I got an early access view of the development.

This game works for 1-4 players and offers various different ways to win like area control, hunting down monsters, completing quests or controlling temples. A deck of event cards also helps ensure that every game is different. Each hero starts with different abilities and how they progress is down to the player and the strategy they use to win. You might buff Achilles to become a strong monster hunter, or Perseus to be a leader of great armies.

While the monuments are outstanding as miniatures in their own right, they are built from their component parts as they are built in the game which gives a tangible sense of progress.

And the monsters look just as impressive. Here are minotaur, hydra and cyclops, just a few of the possible visitors to ruin your plans, or perhaps to provide your path to victory.

The twist on one of my favourite themes, Greek mythology, had me from the start. Below you’ll see the sheer amount of components you get. But instead of being intimidated by an ever-growing pile of miniatures to paint, consider that these miniatures come pre-shaded, and the number of monsters and monuments just give you more variety rather than being unwieldy. 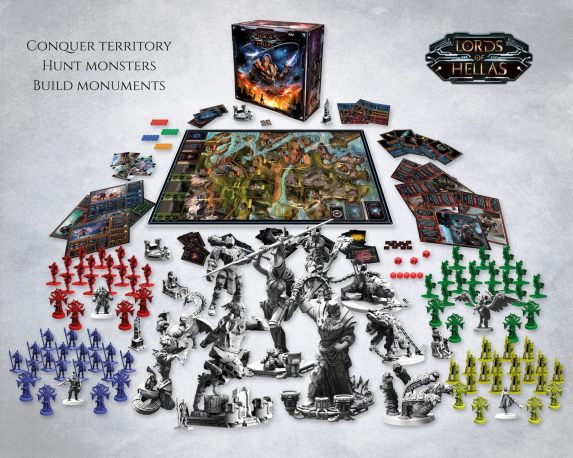 Check the Kickstarter page out, or even a play-through from Beasts of War.