Kickstarter: Legends of the Fabled Realms

The guys at 4ground went live last week with a Kickstarter campaign for their miniatures wargame, Legends of the Fabled Realms. I take a look at some of the miniatures and the story that has evolved from the 4ground team’s own roleplaying environment.

Those fearsome looking chaps are the Druggoi. They strike me as being like zombies in their insatiable hunger, but not all are so mindless, and they’re a whole lot more badass looking. They wear the trappings of their lives before the curse afflicted them so we see the paymaster for a caravan and a professor among their number. And it seems that not just humans are lain low by the curse.

My personal favourites in terms of story, the Eightfold Path are holy warriors, somewhere between Templars and the Grey Wardens of Dragon Age, and immune to the Druggoi curse/disease. These guys are armed, armoured, and dedicated to standing against the Druggoi.

The Druggoi and Eightfold path are the major players in this conflict and as such are the most fleshed out, yet other factions have made their presence known. As the Kickstarter progresses, we should see more from the Mordanburg State Guard, Sell Sword Guild and Venturers Guild.

Some of the best terrain on the market comes from the 4ground workshop and their miniatures follow suit with the same level of quality. As this is a skirmish game, the model count is low so an exceptional amount of detail has gone into each one. Drawing from the rich history of years of roleplaying in the setting, each miniature has a name and a story to which they were sculpted to match. They are made from high quality PVC plastic and come assembled but unpainted.

Some of my favourites are:

Raffa, Captain of the Mordanburg Guard 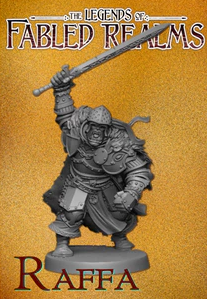 And a tough choice from the Druggoi faction is Kourusi. 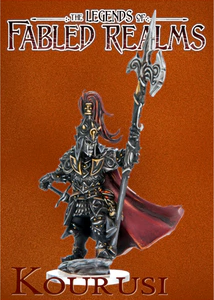 Buy-in starts at £40 for a single faction starter, rising to £70 for the two-player starter. Pledge levels rise as far as your bank manager allows, including a weekend beta testing with Beasts of War. If this Kickstarter takes your fancy, check out the videos at Beasts of War for gameplay and faction focus chats.

With great miniatures and rich background lore, Legends of the Fabled Realms is a tempting one. It’s great to see a game with such story interwoven into the gameplay and the miniatures.

It’s also worth checking out the terrain from 4ground to go with the game (or indeed any of your existing games because it is top quality). Their Mordanburg and Daldorr lines are the ones to look out for in the Fabled Realms.